Mikrolar is a company dedicated to the design, manufacture and application of Parallel Link Mechanisms. These 6 Degree of Freedom robotic devices are also known as Hexapods or Stewart Platforms.

Mikrolar’s R3000 Rotopod assists NASA with the calibration of the 18 primary mirrors on the James Webb Space Telescope, NASA’s premier observatory of the next decade, serving thousands of astronomers worldwide.

The Center of Curvature test measures the shape of the James Webb’s main mirror by comparing light reflected off of it with light from a computer-generated hologram that represents what Webb’s mirror ideally should be. By interfering the beam of light from Webb with the beam from the hologram reference, an interferometer accurately compares the two by measuring the difference to incredible precision.  “Interferometry using a computer-generated hologram is a classic modern optical test used to measure mirrors,” said Ritva Keski-Kuha, the test lead and NASA’s Deputy Telescope Manager for Webb at NASA’s Goddard Space Flight Center in Greenbelt, Maryland. The interferometer is mounted on an R3000 Rotopod from Mikrolar. This platform (shown in the image below) allows ultra-precise positioning for the test. 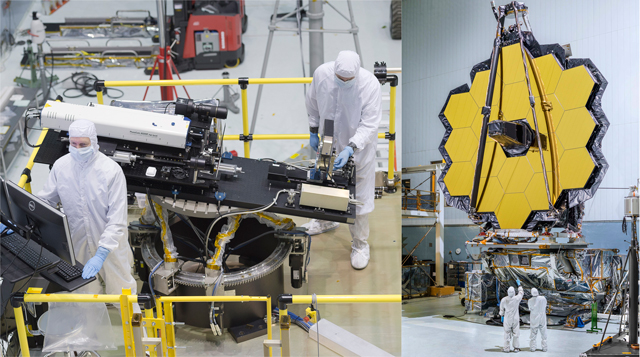 With the largest mirror of any space telescope, taking this measurement is a challenge. “We have spent the last four years preparing for this test,” said David Chaney, Webb’s primary mirror metrology lead at Goddard. “The challenges of this test include the large size of the primary mirror, the long radius of curvature, and the background noise. Our test is so sensitive we can measure the vibrations of the mirrors due to people talking in the room.”